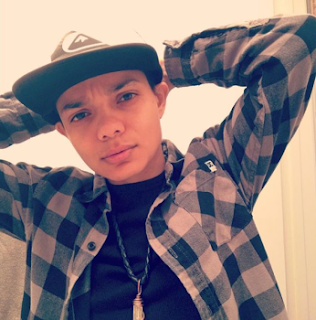 "I am a reflection of you. Tell me what you see."

Ikaika Torres grew up on the island of Oahu, Hawaii. Ikaika’s friends call them Kaika, Kaikz, or Kai.

After graduating from Waipahu High School in 1999, Torres served in the active duty Air Force and was discharged honorably. In 2006 they moved to Las Vegas, NV and worked in the construction industry before earning an associates degree in Creative Writing from College of Southern Nevada.

They published a memoir in 2007 and a novel in 2012. Both titles are currently out of print.

In 2008, Torres went to Washington DC to protest the Defense of Marriage Act and Don’t Ask, Don’t Tell. Torres took part in HRC’s Faith & Religion steering committee. They advised the committee on how to interact with Conservative Christian audiences, for effective communication and building bridges. They organized meetings between Conservative and Progressive Christian pastors to discuss controversial topics like openly affirming sexual orientation. They also helped to create a support group for Christians struggling with same-sex attraction.

In 2011, Torres served the LGBTQ community as a Christian minister. They served at Abundant Peace UCC under Revered Wilferd Moore. They taught Sunday School and occasionally gave sermons. Abundant Peace is well known for their transgender outreach.

At the time, Torres was passionate about expressing the unconditional love of Christ to all peoples.

In 2012, Torres left Christianity in realization that exclusion did not stop at sexual orientation. The Christian Church excluded entire nations and cultures. Years later, Torres saw that they were conditioned to believe that without the blood of Christ, they were not worthy of God’s love or Heaven. This caused extensive damage to the psyche / spirit. Torres no longer aligned with the fundamentals of Christianity.

In 2013 Torres wrote, produced, and starred in the short film The Tell-Tale Heart, a modern adaptation of Edgar Allan Poe’s classic short story. That same year, Torres produced a teaser trailer for their debut novel, I Heard the Pastor’s Daughter is Gay, with the intention of producing a feature film.

In 2013 Torres co-wrote, co-produced, and co-starred in two stage plays, Only Fools and The Beloved, with Logan Writes.

In 2014, Torres played a featured background role in Tim Story’s Think Like a Man Too.

In 2016, Torres began studying and practicing Shamanism. Finally, they found a spiritual practice that honored all living beings. Shamanism brought healing to Torres’ broken spirit, distorted mind, and dysphoric body. Torres feels called to bring this healing to others, particularly those who suffer from PTSD.

Ikaika Torres is now the owner of Mercury Direct, a transmedia production group. They look forward to bringing together a team of indie artists to produce graphic novels, video games, big-budget screenplays, and volumes of thrilling fiction. Look out for interactive social-media storytelling!

This year, Torres is continuing with film school and shamanic training. They plan to film documentaries about gender and Shamanism.

Ikaika Torres is passionate about healing and expanding the collective consciousness through story and energy medicine.

"When someone has upset me to the point that I am tempted to hurt them with my words or actions, I know that I’m the one that needs medicine. They have served my well being by showing me parts of me, shadow aspects, that have never been loved before. It is an exercise to expand the boundaries of the heart, to open the shades, to let Light illuminate the darkness, to remind hate that it is truly Love.

Darkness is forgetfulness. Remember this: all things are Light. Hate is inverted Love. Love is the only thing real," Ikaika wrote.

You can find Ikaika at www.IkaikaTorres.com

Editor's Note: "Ikaika's journey has been transforming and deeply moving. His beauty is in his purity and his transparency of living his life. Ikaika can take us all deeper into our soul, individually and collectively. It is my honor to have him contribute to Our Soul Oasis." ~Wendy
Ikaika Torres our soul oasis shaman